I would like to introduce "The Hell”, a Diablo: Hellfire mod. This modification is in heavy development and with the renewed interest sparked by the announcement of Diablo III, hardcore veterans of Diablo I and II might be very interested in what we have brought to the table. Created by Mordor and The Hell Team, the project was started on April 14, 2006 and the first playable public version was released out about a year later. Since then, the game has expanded tremendously. As more and more people joined our ranks over the years, a community has formed who have helped in different areas to expand the mod.

As of today, our efforts have culminated into version 1.71+ and many bugs of original game have been fixed. It is running smoothly and on average is working way better than original game. The number of changes are enormous, part of them are available via the change-log included in our archive. First and foremost, it has concentrated on eliminating most of the initial bugs Diablo and Hellfire were originally released with.

Some of the core changes to Hellfire are:

- Many new base items with room for thousands more

- Hundreds of new and improved palettes for items, environment and bosses

I'll put it bluntly, not all Diablo veterans will be able to beat the game on Doom mode. It is the most challenging of the Diablo Hellfire mods and we have made sure that it is unsurpassed in quality. The added level difficuly is sure to give even the most hearty adventurer pause. As soon as you step foot in the cathedral you know things have changed. The Hell’s rock hard difficulty will have you coming back for more as you try to climb the metaphorical cliff with your bare hands. As we listen to our fans, due to feedback character and item balancing did occur recently in early Horror mode to reduce the frustration of new players. 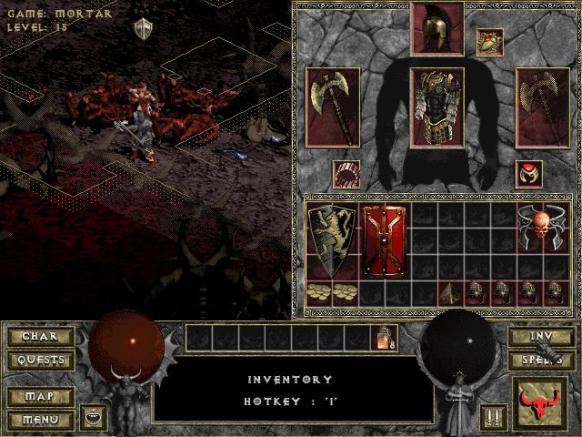 Random unique boss monsters will appear in each level, sometimes several in the same area. We have recently expanded the list of base items, loot tables and drop rates available in the game and look forward to many more making an appearance in future patches. Almost all uniques have been balanced with pros and cons. Never before have you been so looking forward to that next unique just to survive. We have removed or updated many prefix/suffix combos some of which are on par with uniques. 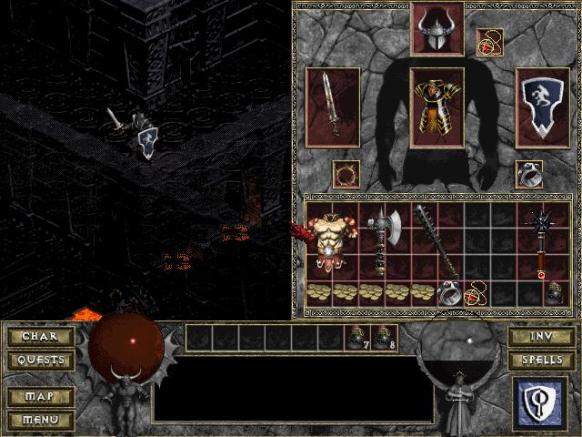 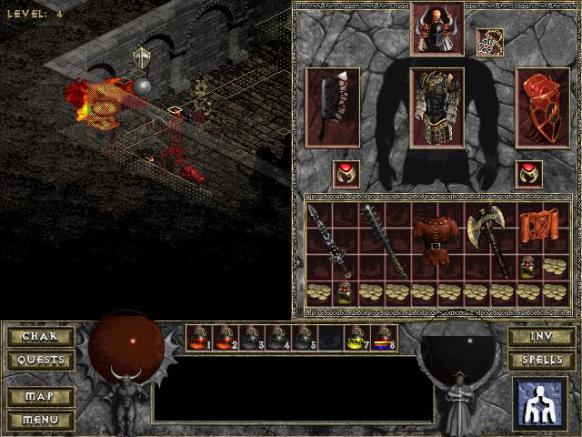 One of the most wanted features for this game that was added was that the Search spell be activated automatically when you set Auto-Map ON. New spell additions include the Hellfire spell which does physical damage for immune to magic monsters, Arcane Nova, Fury and Shocking Blast just to name a few. Some spells inflict knock-back now, which is really useful in some situations. We are still in the process of spell balancing. 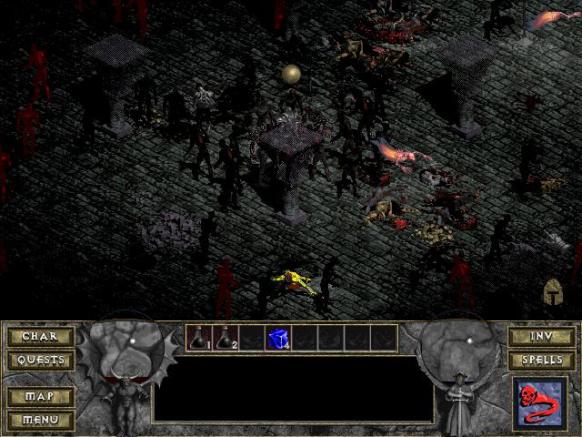 Hundreds of new palettes were developed for each area of the game. For the first time you will be able to walk through Tristram in the morning, noon and dusk. Some items have been recolored and others completely replaced with new graphics. We have two new graphics add-ons and additional high quality music for everyone's listening pleasure. The Bard and the Barbarian from Vanilla Hellfire have become the Assassin and the Gladiator. The Gladiator's animation is already completed and it introduces dual wielding graphics in the game. Currently, we are working on the Assassin's improvement. Another interesting new feature of the mod is "Gillian, the Stasher". She will keep your valuable equipment safe until you need them again. She lifts the burden from your shoulders, you will see! There's a very useful clicker program on the mod's homepage, it can spare you tons of trouble down there. 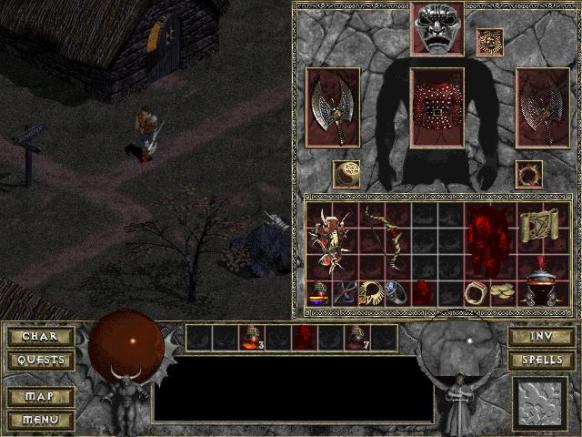 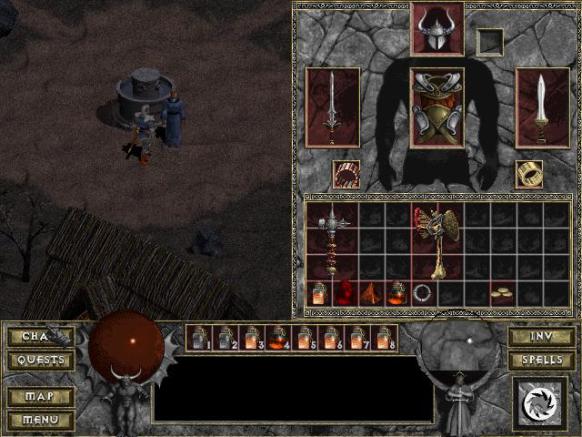 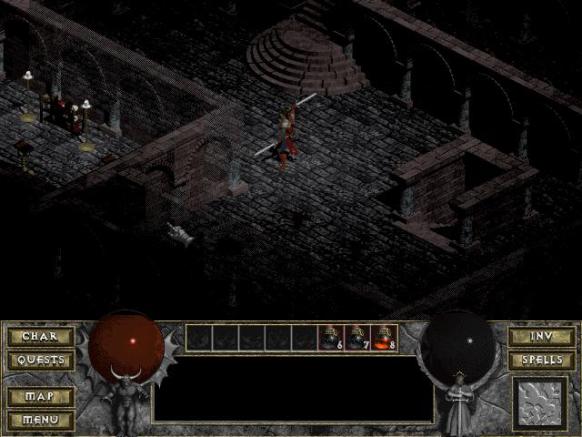 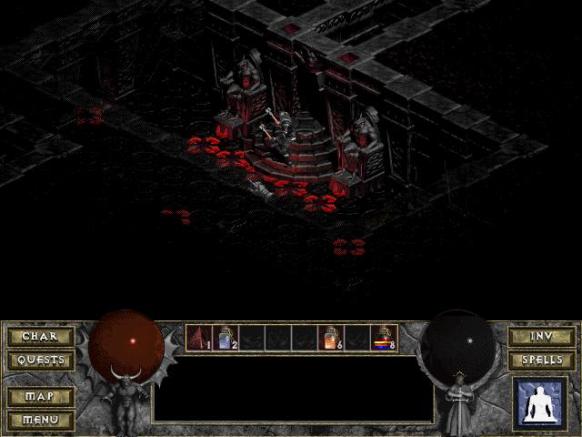 Key features like restriction to Horror difficulty below clvl 30+ and Purgatory difficulty below clvl 40+ characters help in balance and to avoid frustrating players. Gear loss upon death has also been removed. We have fine tuned the rate at which characters gain experience. As this is a mod, you cannot import existing Hellfire characters into The Hell. Starting from scratch is a daunting task but at the rate of character growth we have set, you will have time to get accustomed to the tactics and the gear necessary to survive.

One of the most appealing features of this mod is the ongoing effort to implement all of the original Diablo 1.09 patch fixes into the game, as Sierra forgot to do this for us. But that is not all of the great things we have to offer. Bug reports and suggestions are of utmost importance in the polishing of this mod. If you like it, help to improve it even further. This mod carries on the legacy of some notable Diablo Hellfire mods from earlier in the game’s history. Although they are not supported anymore and do not have updates, some of their great features and ideas live-on in The Hell. Today, this is the only mod still full of life in the world of the original Diablo: Hellfire (The only possible exception is The Dark but unfortunately it has not seen a new version for nearly two years).

This game has a full support for multi-player with the help of a free independent program called Hamachi. Documentation on how to setup and use it is available on our website. Of course, if you want to play with a friend, you can still connect two PCs to each other via null modem. 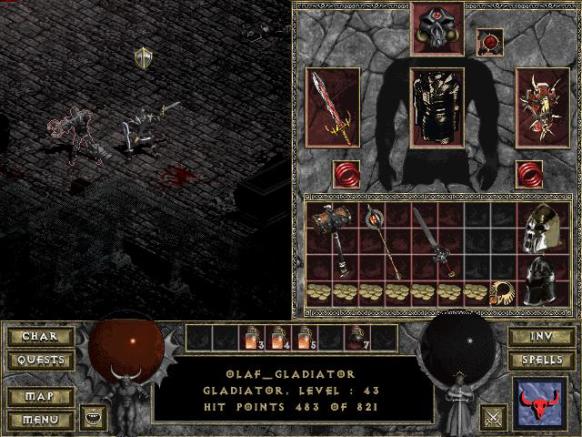 You will most likely not be able to beat the game in your first attempt. Instead, you will be required to conquer every area. We recommend playing all three difficulty levels one by one. Don't start playing at the next difficulty level unless you have finished the previous one. Not only this will prove way too challenging (or most likely, impossible) but you will spoil your pleasure from playing. Forget all you have learned in previous Diablo/Hellfire mods, this one is different. Horror difficulty is basically the entry level to get you familiar with the tactics necessary to succeed and give you a taste of what is to come. The real experience begins from Purgatory onward. The game is balanced to reach the most fun on 'Doom' mode, so don't quit after beating the game on Horror difficulty as it was only the beginning. Playing on Doom mode will never be dull or easy because no matter how high your level is or how good your equipment, you'll always die quickly with a lapse in concentration.

Again, I'm going to repeat it: this game is extremely hard. Do not overestimate yourself as you venture deeper into the labyrinth. Some of those monsters are very unforgiving. While single-player allows you to take enemies one by one and reload your game in case of failure, multi-player absolutely requires cooperation. Playing The Hell in multi-player alone will be almost impossible sometimes. Prepare yourself well to face them, The Butcher and King Leoric will never be the same experience again!

There are quite a number of things you should know before starting to play this game. You can check the 'Guide' section on the webpage for this info. If you've got questions, you are welcome to ask them on the TH forum. You will find a lot of useful information there. The homepage and documentation of The Hell is very user friendly. You can hardly find another mod which supports five languages on its website and three in it's readme with plans for other languages as well. We have an ever growing community with a lot of people contributing to it’s success. We think that this mod has incredible potential besides it's already achieved merits.

This is our developer's testimonial: "I have always loved this game for its original taste: dark atmosphere, cold steel and blood. I've been playing Diablo and Hellfire for ten years and this mod represents all that I ever wanted from this game. This is Diablo's best of the best. Don't be fooled by the simplicity of the game or by it's similarity with Hellfire. It is an absolutely new & improved game under the old mask..."

We wish you happy slaying... and see you on Hamachi!

Retrieved from "https://fangaming.fandom.com/wiki/The_Hell_Diablo_Hellfire_mod?oldid=3252"
Community content is available under CC-BY-SA unless otherwise noted.